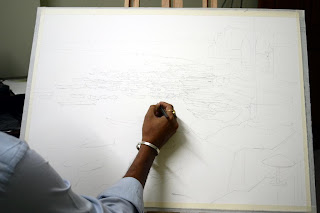 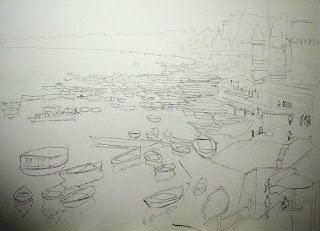 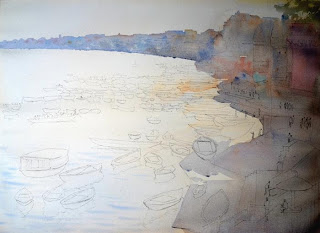 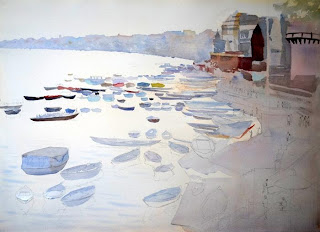 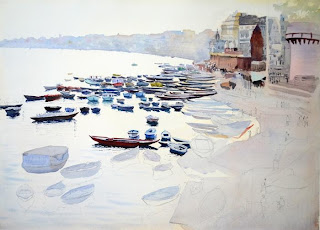 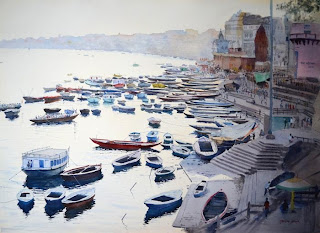 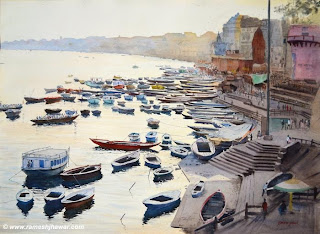 
I’ve often tried to capture images to show my work in progress but almost every time I become so engrossed while painting that I forget to click them. It becomes difficult more so, when you are painting in watercolors, as the colors dry very fast. So one needs to be fast to click the images in between, or the painting gets unwanted hard edges! This time, I succeeded…though not fully, he he…I missed a couple of shots towards the end. But I still feel that you’ll enjoy the various stages of this painting.
After completing the painting, I reviewed it next day and felt that the temperature of the painting looked a little cool…I wanted to give the mood and feeling of a late sunset, when the sun has just gone down, so I applied a glaze of raw sienna on the distant buildings and adding burnt sienna to the wash while coming on to the closer buildings and the ghats. Also applied a thin glaze of orange on the water for balance. You’ll notice the difference in the last 2 images.


Have a wonderful week ahead!
Posted by Ramesh Jhawar 10 comments:

2 more paintings from the ongoing series... 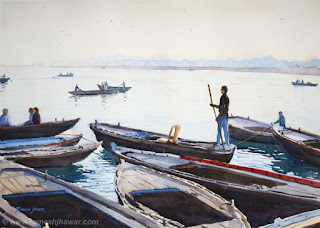 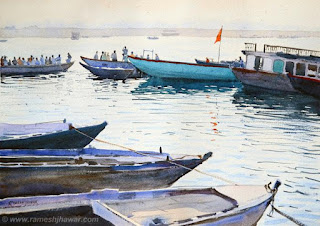 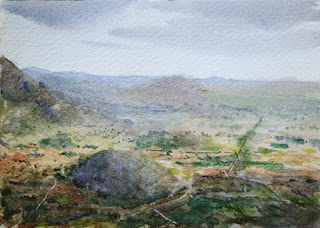 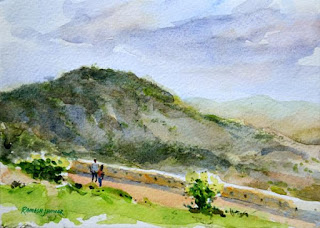 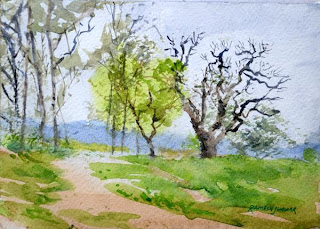 
Last Sunday, I had gone to Nandi hills for plein air painting with a group called Pencil jammers of which I’ve become a member now. We were 21 artists in total which also included one of my close friends, Prabal Mallick. Initially I was very excited and quite sure about painting some nice sketch studies of the place. After a while, I begin to feel totally the opposite! Painting on spot is very different from painting in your studio. First, it was very windy and chilly. Second, the light just kept changing, transforming the entire scene from cool to warm and vice versa. I finished 3 sketches and needless to say, was not very happy with them. Felt others did better!
After coming back, I just evaluated the sketches and felt the values needed to be adjusted a bit which I did and voila!...the paintings begin to look a lot better!
I also painted 2 different versions of a scene back in my studio from a reference photo that I took while we were coming down from the hills. As soon as I finished the vertical one, I was tempted to try out a landscape version of the same scene. 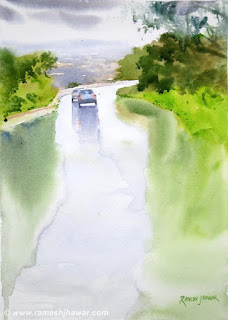 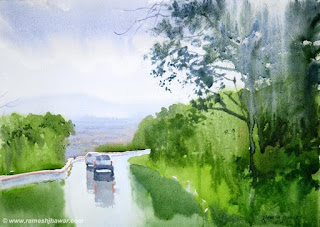 Hope you like both and the sketches as well.

I've started a new series on Varanasi - a very ancient and holy city which I had visited a couple of months ago. This is the first in this series...more to follow. Hope you enjoy! :-)
Posted by Ramesh Jhawar No comments: 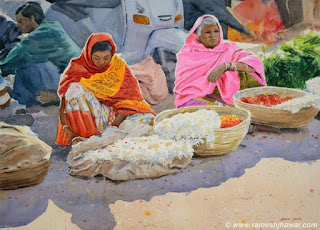 My second full sheet watercolor! Painting on a full sheet still looks daunting...must get used to it!
Posted by Ramesh Jhawar 2 comments:

Hi all…it has been so long!! I’ve moved to Bangalore and slowly coming to terms with my new surroundings. Whoa…everything had been so hectic! I’ve never had such experience…my life had been so easy all these 35 years…he he!


Ah well, everything is in order now in the new house. My son has started his schooling and finally I have time to start my work! I’ve finished a painting today, the one that you see on the easel. I’ll be posting it next. 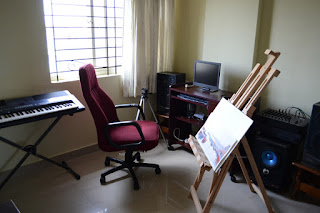 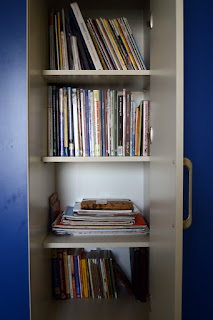 My little library for inspiration and motivation...

One huge difference I clearly felt in both the places is the weather. Its kind of chilly here because of the heavy downpours in the last week as the monsoon is fast approaching but its very good for painting in watercolors as the paper stays damp for a longer time. It was totally the opposite in my earlier place…it was so hot that I never dared painting…the colors would just dry the moment they were applied! 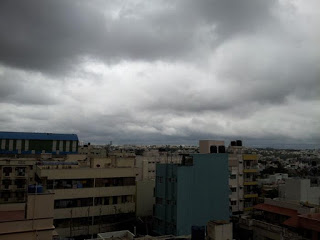 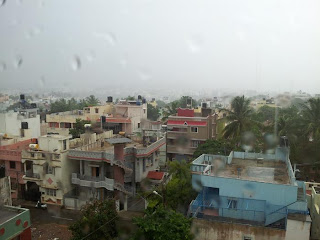 View from my 4th floor house...

And finally wanted to share the news about the sale of 3 of my paintings recently…Ciao :-) 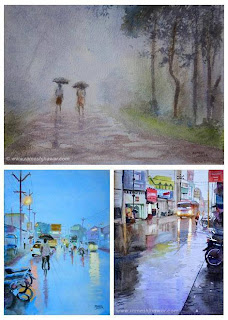